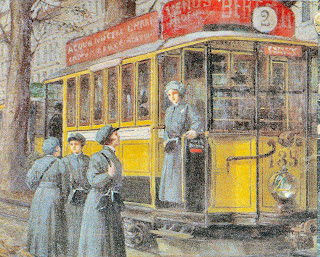 With startling suddenness Uxbridge and the whole of West Middlesex found itself tramless on Saturday through a strike of women workers.

The cause of the trouble was that whereas the award of the Committee on Production gave five shillings to the men it declined a similar concession to the women employees. Those employed on several services of the London United Tramway Company including the Shepherds Bush, Uxbridge line refused to start work on Saturday morning.

No intimation of their intentions was given and many early morning workers found themselves unable to get to business. The inconvenience increased during the day. People in the Hayes and Hillingdon districts who desired to get to Uxbridge or Southall to do their Saturday shopping were faced with the alternative of walking or going without provisions. There was no question of buying locally for many of the villages are rationed for meat, butter etc at town shops and were therefore in an awkward position.
The stoppage came as a thunder-bolt to many of the men conductors and drivers who had heard nothing about it as it had been more or less secretly organised by the women. One conductress thus explained the situation, "When we were taken on by the Company they promised to give us whatever rise the men had. We are doing just as much work as the men who realise the justice of our case and are supporting our strike."
Male employees who are opposed to the women's claim base their opposition to the fact that many conductresses are the wives of soldiers and are receiving separation allowances, whereas the men have families to support.
During the week the strike spread with startling rapidity. The bus employees in and around London joined with the tramway people and these were followed by tube girls.
By Tuesday places affected included Bath, Brighton, Bristol, Folkestone, Hastings and Weston-Super-mare.
Sir George Asquith, the chief industrial commissioner, had held a number of conferences with the parties engaged in the dispute with the hope of arranging a settlement, but it was not until Wednesday night that an arrangement was reached.
A conference under the auspices of the National Transport Workers Federation was held in the morning and a resolution was passed committing the unions affiliated to the organisation of "Immediate appropriate and determined action" to enforce national adoption of equal pay for equal labour to women and men. The unions represented at the conference were the Amalgamated Association of Tramway and Vehicle Workers London and the Provincial Union
of Licensed Vehicle Workers, National Union of Vehicle Workers, National Union of General Workers and Dock, Wharf and Riverside General Labourers Union.

The terms of the resolution adopted by the conference were sent to Sir George Asquith, chief industrial commissioner, and in the afternoon delegates from the conference were received by him. After discussion lasting four hours the following official announcement was made, "The three Unions concerned with representatives of the National Transport Workers Federation
met with Sir George Asquith today and after lengthy conference decided to recommend to the Executive Committee the following terms.

Resumption of work pending reference to the Committee on Production of interpretation of their awards, namely whether under Clause 14 of the Award of July 9 the Committee be understood to nullify any agreement or undertaking and in particular any such undertaking as is alluded to in Clause 4 of the Award
of March 8 and on the claim that equal total payments be made to women as to men for equal work in the tramway and omnibus, undertakings who were parties to the Award of March 8 and July 9 and that any present changes of payments are to date from the beginning of the first full pay day following July 9 and that any future changes of payments should take place jointly with those of the men. The Hearing will take place on Monday next at 2.30 and the Awards will be issued as speedily as possible."

In the Uxbridge district great inconvenience has been caused by the stoppages. Many of those who in the past decried the trams have now realised their worth, tradesmen have found a considerable falling off in their takings and many people have passed the remark "Doesn't it seem strange without trams?" Men on government work in the district have suffered by the stoppages, but at one big works motor lorries have been conveying men to and from work, trains have been more than usually uncomfortably packed and bicycles have been more generally used this week than for a long time past.

A large majority of women tram and bus conductresses joined unions by 1918. Many had been practically compelled by men members to join the union. The understanding was that they should be employed on exactly the same terms as men whilst their employment must terminate by the end of the war. In some cases women were employed on short shifts, but this policy was opposed by the Union. It was feared that any relief of this kind would not only give employers an excuse for deductions from wages, but add to men's hours of work. It might even have the undesirable effect of encouraging women's employment in the future. Women drivers who were entirely composed of commercial private employees formed a comparatively small section of members, probably less than 1/8th.

The larger number of women drivers involved for auxiliary war service were not encouraged by the government to join Trade Unions. Women tram and bus conductors who were well organised for a start, had little difficulty in obtaining men's minimum rates of wages, but the question of war advances was a matter of constant dispute. The important National Award for February 1918
which men received an aggregate advance of 20/- a week on pre-war rates, laid down that, "Where agreements or awards already exist providing the same rates to be paid to women as to men, such agreements or awards are to hold good and an increase to be paid accordingly." In the absence of such agreements, women were to receive only an advance of 4/- on the current rates.

The London Women Bus Conductresses were at once accorded the full bonus and a subsequent decision of the committee of production by which they were refused, a further advance of 51- met with such a determined resistance that the decision was reversed. All women were however by no means so
successful Outside London the women's claim had been prejudiced for the most part by the terms of previous awards by which they received not more than about two thirds of men's war advances.

In London, however, their claim was undeniable and here they secured the full sum of 20/-, bringing up their earnings to 63/- a week. In the following July a fresh appeal was made to arbitration, and men were granted a further advance of 5/- a week. But this time the women were left out. The award met with an unexpected storm of indignation. London women bus conductresses were not accustomed to such treatment. They had, moreover, begun to taste power. A protest meeting was held at once and they announced their intention to take drastic action unless their claim received attention. It did not receive attention.
It was apparently not even communicated by their Union to the Company. In August, therefore, the women struck work without further notice and the men came out after them.

The public were surprised and not a little inconvenienced, but its sympathies were in the main on the side of the women. Even The Times admitted the strength of the women's case which lay precisely in this - That their work was as well done as any man could do it and that everyone could see that it was.

The Committee of Production by which body the award had been given was obliged to yield to the storm and to re-consider its decision and the women won their case.
Such was the victory of the women tram drivers that Mary McArthur, the Leader of the Women's Union declared the award to be the absolute vindication of the principle for which we are contending.

The London United Tramways began operating a service between Southall and Uxbridge (along the Uxbridge Road) in May 1904.

At Uxbridge Civic dignitaries gathered at the municipal boundaries to raise their bowler hats and wave an "open sesame" to the tram. The streets bedecked with flags and bunting, crowds lined the route to see the tram glide safely along. Hillingdon Band played and the bells of St Margaret's church rang out, children were given free rides, and a lunch was held for 90 prominent people in the Chequers Hotel
The first London Transport Trolley bus from Shepherds Bush to Uxbridge ran in November 1936 and last ran 8th November 1960
The Hayes Labour Party regularly called for a more regular and cheaper service from Hayes station (opended 1864) and the Hayes Communist Party in its 1945 manifesto called for the extension of the Underground line to Hayes.
Hayes Labour Councillors had been calling for a Tram line to replace the 207 bus route from the mid 1980's