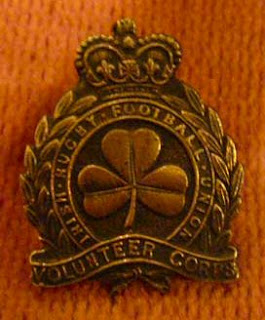 IRISH RUGBY AND THE 1916 EASTER UPRISING
In Ireland those who fought for independence during the 1916 Easter uprising are mythologised, Indeed it is said that if everyone who claimed to be in Dublin G.P.O (General Post Office) on the day of the Rising, had actually done so, they could not all have fitted inside.

However, one group of Irishmen who were defiantly not inside the Post Office on the day of the rising, were The Irish Rugby Corps.

The Irish Rugby Football Corps (Ireland had been home national rugby champions 1914) had been established just two weeks after World War One had been declared, as part of the Irish Association of Volunteer Training Corps.

It was organised on a similar bases to the English and Scottish Football, Sporting "Pals" Battalions. Frank Browning President Irish Rugby Football Union clubs became the driving forces behind the Corps issuing a circular to Dublin Rugby Clubs in 1914 encouraging members to join up. 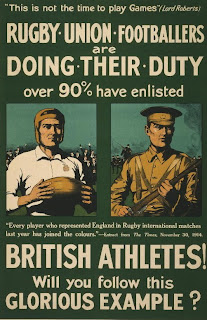 Almost 200 enlisted at Lansdowne Road, in D company of the 7th Battalion of the Dublin Fusiliers, those older or "unfit" were sent to Dublin to establish a "home guard".

Both groups would come to a unhappy end. For those who were declared "fit" and enlisted ended up in the "hell" that was Gallipoli and those that remained behind, literally walked into the Easter Rising.

Francis "Chicken" Henry Browning had been President of the Irish Rugby Football Union clubs since 1912 and became the The Irish Rugby Union Football Corps Lieutenant-Col.

Frank Henry Browning, had been born in Dublin on 23rd June 1868. He had been a first class cricket player, having played for Marlborough, Ireland and he was also a member of MCC, In 1889 according to Wisden he made over 2000 runs. Browning had also been a keen rugby player, playing half back for Trinity, Wanderers and Ireland. 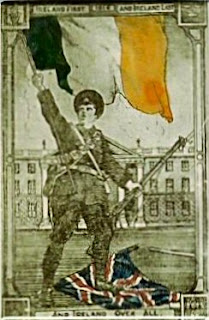 On the day of the rising 24th April 1916, the Irish Rugby Union Football Corps headed by Browning had returned to Dublin from a route march and drill practice with drums beating and standards held a loft and marched straight into the maelstrom that was the Rising, totally unaware of the momentous events that were unfurling around them. The Corps in civilian clothes with arm-bands were carrying rifles but not ammunition; in the ensuing encounter with the "Rebels" seven members of the Corps were wounded, four fatally. Browning was shot in Haddington Road, (Beggars Bush) and died of his wounds two days later 26th April 1916.

Browning was therefore the only first class cricketer to be killed during the War for Independence and only member of the MCC to have been involved in the 1916 Easter Rising.

Francis Henry Browning is buried in Deansgrange Cemetery, South Dublin. A headstone was erected by the Irish Rugby Football Union Volunteer Corps in memory of "an honourable comrade and true and distinguished sportsman."