Dan Moriarty (St Bernards - Southall) was one of the most popular and respected members of the COHSE health care union National Executive Committee until his retirement last year (1972). He had represented No. 6 Region since 1968 and was also a member of the Legal and Parliamentary Committee and the Staff Superannuation Committee.

Dan, accompanied by his wife, was the guest of honour at the Annual General
Meeting of his former region on 16 April and was presented with a cheque and
framed life-membership certificate.

In making the presentation, Tom Hedditch.  Regional Chairman during Dan's
term of office, referred to his exceptional personal qualities saying: 'He was never
too busy to try to help not only his fellow trade unionists but his fellow men.' His
generosity  and  compassion  were  well known and demonstrated in his everyday
approach to life: although he had suffered the horrors of a Japanese prisoner of war
camp, he bore no resentment towards his former captors - his regard for his fellow
men was not limited by race or creed.

St Bernard's Hospital Branch, where he was branch secretary, owes a great deal to
Dan's organising abilities; it is now one of the largest branches in the country, and
Charlie Wood, who spoke as a member of the National Executive Committee, said
that Dan's point of view had always been respected  and  he  paid  tribute  to  his
diligence and devotion to duty.

Mrs Moriarty, who was presented with a bouquet of flowers, was described as
'The good woman behind the man'. There is no doubt that her support had contributed to her husband's success.

In reply Dan, who now lives in South Wales, said it had always been a pleasure
to carry out the various duties required of him, and referred to No. 6 Region as the
most vigilant and enthusiastic in the Confederation. He sincerely hoped that the
standards he had set over the years were acceptable.

As Regional Secretary, may I say that for No. 6 Region there is no doubt that
Dan Moriarty's standards were most acceptable - the point is whether we who
follow him can even attempt to follow in his footsteps. We wish him all the best for
a long and happy retirement. 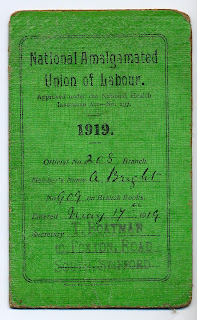 The first general trade union to begin union organisation in the new factories of Botwell, Hayes, West London at the beginning of the twentieth centaury was the National Amalgamated Union of Labour (NAUL).

In September 1911 Joseph N Bell (later Labour MP for Newcastle) spoke to over hundred and fifty men in Clayton Road calling upon them to “combine against capitalism” and W. Watts in January 1913 at Clayton Road schoolstated “In Hayes the future had a bright outlook if only the workers will grasp the weapon within their reach (trade union organisation) there was no time for delay he went on "The meeting in Hayes had been called to show the workers of Hayes the value of organisation, and to give the reason why a living wage (30 shillings a week) cannot be obtained in Hayes without it"

T. E. Smith NAUL Organiser stated "there again, there was danger that the men of hayes would be replaced by females, who would work for less wages. But in large industrial centres, Lancashire especially, this could not happen as the workers were organised, and so their trade union stopped it....By joining the trade union they would improve their conditions, and at Hayes, it wanted improving. the whole responsibility rested with themselves" 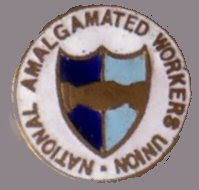 The NAUL circulated a leaflet around the Hayes area advertising factory gate meetings, one in early 1913 stated

"The Value of Organisation" Come in crowds and hear the truth of why you do not get a living wage in hayes, which is within the London County Council radius. Why remain outside and gamble ? Trust each other and join the union.

The local branch Secretary of the NAULMr W Watt stated "There is no reason why they should not call the local Gramophone factory, not his master voice but the workers voice"

Another strike took place in June 1913 in the press room at the Gramophone Company in Blythe Road after a wage cut of 3d per hour was imposed, The strike involving over one hundred men and picketing , collapsed when management threatened to sack the strikers, the leaders being dismissed and victimised, Mr T.E Smith of the NAUL heavily criticism those that returned to work. A poem during the strike printed to the local paper gives some insight into conditions faced by the factory workers at Gramophone

In March 1916 J.A. Seddon MP spoke at a NAUL meeting in Hayes stating that he was "astonished to learn of the low wages some of the girls in the Hayes factories, but was glad tolearn thanks to trade union action a number of special improvements had been secured" 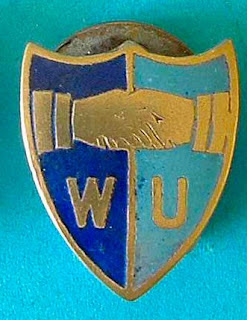 From 1924 Page he worked at HMV (later EMI) He was also a prominent Labour Councillor from 1924 and a towering figure in the Hayes Labour movement for the next fifty years. While the union he helped establish in Hayes, the Workers Union, later known as the Transport & General Workers Union (TGWU) would come to dominate Hayes for the next ninety years.

William Unwin (Financial Secretary), William Stanley and Joseph N Bell (Corresponding Secretary) with A.T. Dipper (General & Organising Secretary) together with six District delegates, But their task was constantly thwarted by strikes and lock-outs, being forced in 1890 to spend 25.18% of income in strike benefits.
The NAUL were soon boasting District organisations in the Clyde, Belfast, Mersey, Sheffield, Thames and Medway together with their more traditional districts in the North East.

The NAUL had a considerable hold in the cement works along the banks of the Thames. In London some engineering workers were in the N.A.U.L. and it had a few members in the south-west in cement and one or two other industries
From 1917 the NAUL was in discussions with the Workers Union on possible merger, but a loser Federation was established, with a joint executive committee, this loose Federation was joined by the Municipal Employees Association in August 1918 and by 1919 the three union Federation became known as the National Amalgamated Workers Union.

The NAUL would later join the National Union of General Workers to form the General & Municipal Workers Union , now known as the GMB 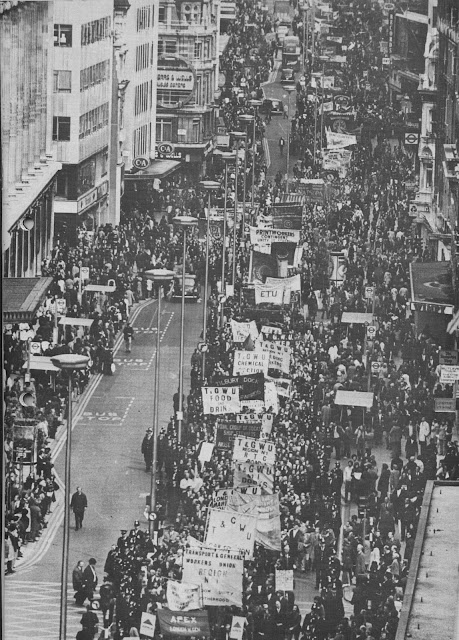 London saw its biggest and most united demonstration since the war as over 20,000 people marched, banners waving to the tune of a jazz float organised by the Musicians Union, from Temple to Hyde Park corner; in Glasgow 12,000 marched, in Liverpool 15,000 and in Birmingham 10,000.

Everywhere was the same slogan's - "Give use a decent standard of living", "Stop rising prices" and "Unfreeze our wages " Stop the Freeze" and "Heath Out"

How much longer must we tolerate rising prices, stagnant wages and Tory self-advancement at the expense of the workers.

in Britain the message of this year's labour day is as it has always been - the demand for a just, egalitarian society and a decent standard of living - a demonstration of the mighty power of the working class