The Hayes Labour Hall, Pump Lane, Hayes, Middlesex. Known often as the "Kremlin" has been the centre of political power in Hayes for Eighty years.

The Hayes Labour hall was opened by Dr Marion Phillips MP for on .

Soon after its opening, substantial alterations were made to the hall costing £200. These alterations included painting the exterior, the two cloakrooms were built (at the front of the hall, a kitchen was built, a stage erected, and a partition built in order that two meetings could be held on the same evening.


Mr P Brown who presided over the official opening after the refurbishment in October 1930 “welcomed them to the supporters of the hall to their new home which was the result of continuous efforts on the part of some of their fellow members of the various organisations in the district, some of these workers were not now associated with the task but the efforts had to be borne in mind at such a time as this”.

He went on “the opening of the hall filled a real need in the district and he felt that the various organizations would not be sorry to have a meeting place in which there was a security of tenure without appealing to the generosity of anybody”.

The Hayes Labour Hall is a “corrugated metal” structure and was formerly owned by the the Hayes Labour Party purchased it and moved it to the present site, The hall and the extra land cost the Labour party £164.00 secured through a mortgage on top of which was a piano purchased at the cost of £3. 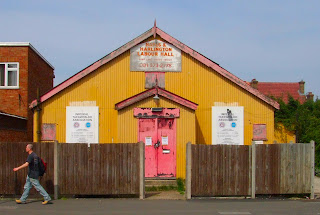 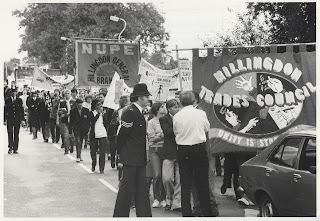 Uxbridge Labour Party banner dates from the late 1970's. The banner was in Red and Gold (traditional colours) and had emblasoned upon it the slogan Peace, Jobs, Freedom - and the old Clarion slogan "Socialism - the hope of the world".
Posted by Michael Walker at Thursday, January 08, 2009 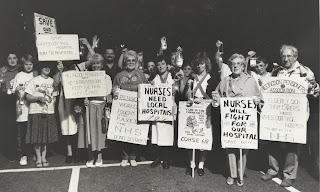 A vigil against the privatisation of Hayes Cottage Hospital, The local health authority was keen to sell off care of the elderly and local GP's failed to support the Hospital. Dr English only offering support when it was to late, despite being a health authority member.