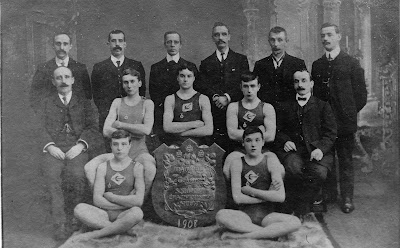 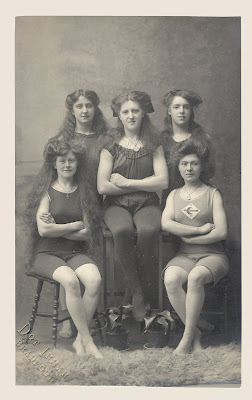 Much has been written about the Clarion Movement's cycling clubs, rambling clubs and choir's, but very little on it's other clubs including the National Clarion Swimming Club which was established in 1905. 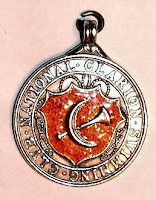 Above is a picture of 1908 Clarion swimming Champions (believe it is Blackburn ?) and  Bradford Clarion Swimming Club women lifesavers (now lifeguards) dated 1907, (note the Clarion logo on the swimsuit) .

Swimming would have been a very rare experience for working class people at the turn of the last century, especially women and as a consequences local newspapers frequently record the tragic stories of young working class children drowning in rivers and canals.

The other picture is of a silver national Clarion Swimming Club medal awarded in 1908 (which is now in the People's History Museum). 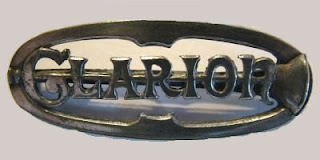 Wapping Road School, built in 1877, was a ‘Board School’ under Bradford's very own W.E. Forster's Education Act of 1870.

More than a century ago, the school created national and international headlines with the help of education Clarion and ILP supporters campaigners Margaret and Rachel McMillan and their push to improve the health and education of working class.

Their influence helped bring the country’s first school swimming pool to Wapping Road school and nearby Green Lane School in 1899. 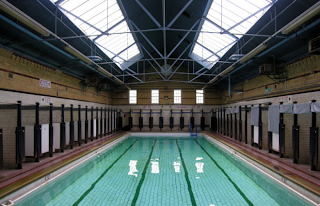 Above is a picture of Manningham swimming pool

By the early years of the last century there were enough Clarion Swimming Clubs to form a National Swimming Club in 1905, with its own silk woven badge to sew on swimming costumes.

A national Clarion Swimming Team went on to compete abroad in the 1920's as part of the International Sports movement.


A Mitcham Clarion Swimming Club (South London)  is still in operation but it is unclear if it has a historical link.


A new venture which should interest your readers in London, is the Clarion Swimming Club. This group now have well over a 100 members, who meet every .Wednesday at the Haggerston Swimming Baths.

They have the use of a clubroom which is attached to the bath, and here, from 8 to 10.15 p.m. comrades can dance, play ping-pong or darts, and amuse themselves in many other ways.

From 8.30 to 9.30 they, swim, and even have instructors to teach the unenlightened.

The whole evening costs only 6d., which compares very favourably with ordinary swimming, I understand that all comrades living reasonably near are invited to go along on a Wednesday evening to try it—if they cannot swim, the clubroom is at their disposal.

Col: Peter Stubbers The Man Who Executed Charles I ? 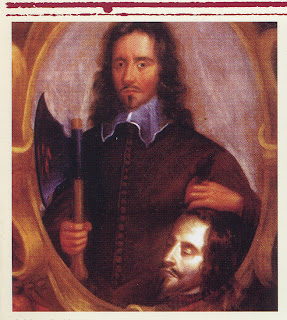 After the Parliamentary victory in the English Civil War and the trial of Charles I it was necessary to find an executioner willing to carry the sentence out.

Richard Brandon the City of London executioner refused and so emissary were sent to Ireland, Scotland and wales in search in search of a volunteer. The prime suspect was believed to be Richard Gunning of Galway, Ireland who claimed that, his arm "had felt the muscles on the neck of the King of England" and that the property in the High Street, Galway known later as the "Kings Head" was given to Gunning as reward for his part in the execution, but evidence points to his neighbour Col Peter Stubbers as the executioner, for when King Charles II introduced the Act of indemnity that pardoned some of those who rose up against his father Stubbers was specifically exempted from the "pardon" and this, along with Stubbers swift exit and subsequent disappearance makes it likely according to local Galway historian Jackie Ui Chionna that Subbers the former Mayor and Military Governor of Galway was infact the executioner of Charles 1.

Today, the Kings Head pub in Galway, Ireland stands uniquely amongst public houses as being named in honour of the man who cut off  real Kings Head

(Picture of Col Stubbers and King Charles I head)
Posted by Michael Walker at Friday, July 27, 2012