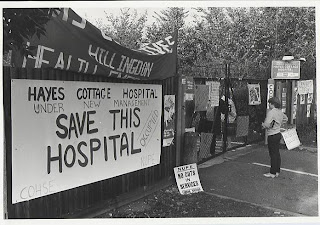 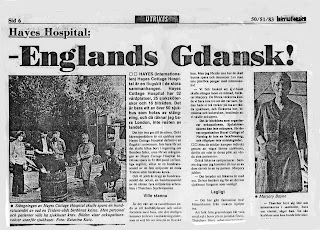 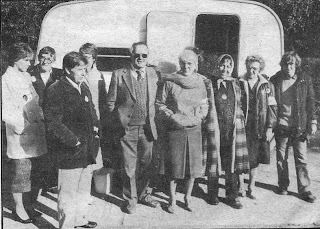 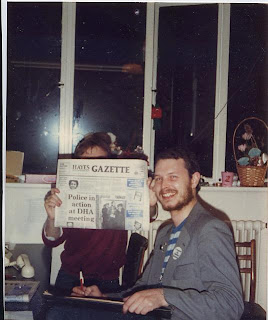 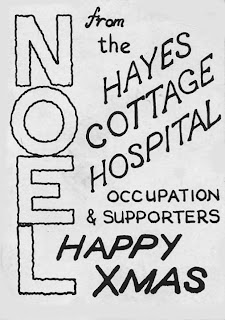 Hayes Cottage hospital, West London. Occupied 25th October 1983 until late December 1983, when the local health authority backed down and the hospital was saved. 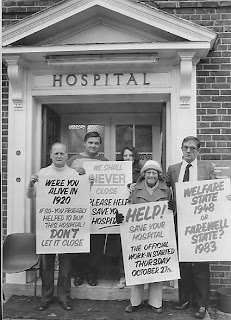 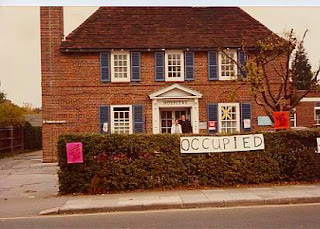 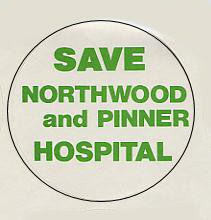 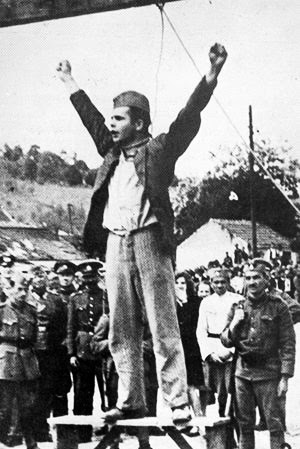 The young man striking the dramatic pose is Stjepan Filipovic, an anti-fascist partisan hanged in the city of Valjevo by the Serbian State Guard, a collaborationist force working with the Axis occupation of Yugoslavia.

Filipovic is shouting “Death to fascism, freedom to the people!” — a pre-existing Communist slogan that Filipovic’s martyrdom would help to popularize. Smrt fašizmu, sloboda narodu! … or you can just abbreviate it SFSN!

In the city where Filipovic died, which is in present-day Serbia, there’s a monumental statue in his honor replicating that Y-shaped pose — an artistically classic look just like our favorite Goya painting, poised between death and victory. 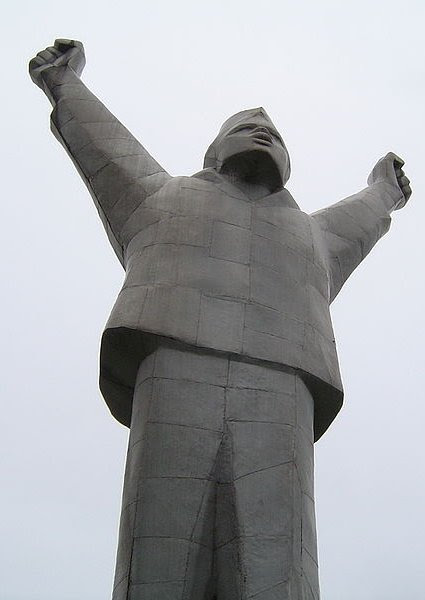 Since the break up of Yougoslavia he has been claimed by all sides - Valjevo monument — it’s in Serbia, remember — calls him Stevan Filipovic, which is the Serbian variant of his given name. But as Serbia is the heir to Yugoslavia, he at least remains there a legitimate subject for a public memorial.

Filipovic himself was Croatian, but his legacy in that present-day state is a bit more problematic: in his native town outside Dubrovnik, a statue that once commemorated Filipovic was torn down in 1991 by Croat nationalists; its vacant plinth still stands sadly in Opuzen. (Opuzen’s film festival, however, awards its honorees a statuette replicating the destroyed monument.) 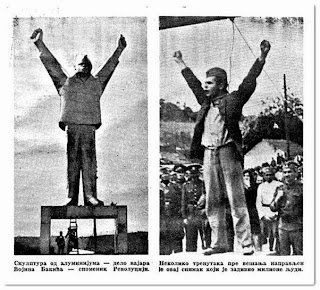 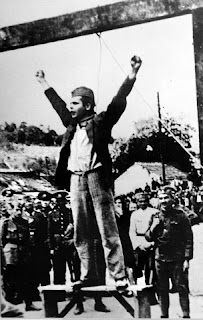 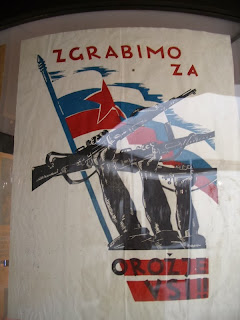 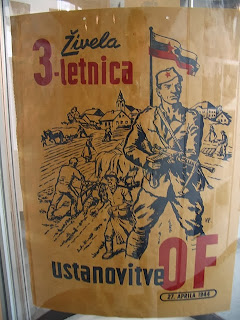 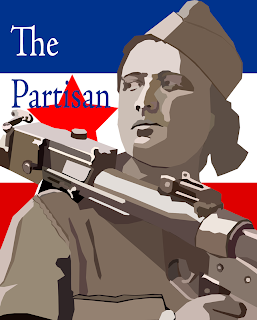 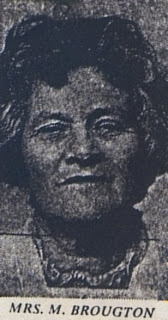 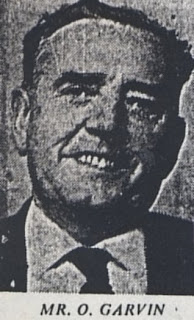 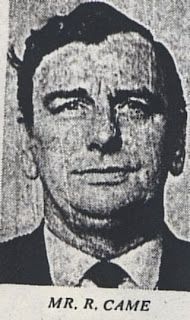 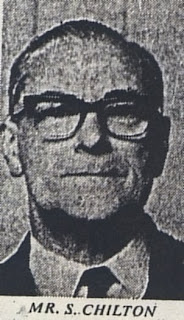 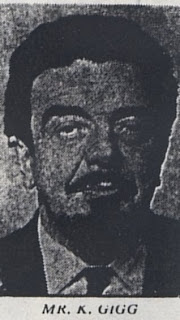 President of Hillingdon Trades Council
Arthur R Groves called for maximum support for the demonstration against the Industrial relations Act on 21st February at Hyde Park at 1 pm
"I dont believe this will stop the Industrial Relations Bill- only general action will do it, not a days strike but a general strike...I would prefer to strike for five weeks than have to put up with five years under the Tories"


Vishnu Sharma spoke on the New Immigration Bill at a meeting organsied by Hayes Communist Party April 1971 He stated the new Act "would create insecurity in the lives of coloured immigrants and help the racialists to persuade Britons that black people were undesirable".

Arthur Skeffington MP had died causing a by election, John Ryan former Labour MP for Uxbridge decided not to stand


New Oxfam shop to open at 44 Coldharbour Lane, Hayes in March 1971 run by a Mrs Davis 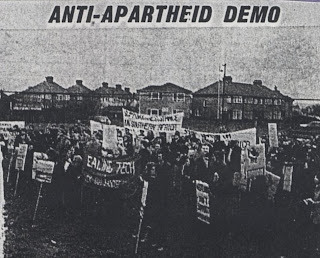 March 1971 an Anti Apartheid demonstration on Botwell green was held in Hayes under the auspices of the Anti-Apartheid Movement. marched from Botwell green to a field in North Hyde Road


A new housing estate for British Airways staff was opened April 1971 at Manor Court, Monument Hill, Weybridge for BOAC workers. The scheme comprises of 75 two bedroom flats in three blocks built by the British Airways Staff Housing Society Limited. The BA Housing Society had now provided 1,650 houses. One of the first residents was Mr & Mrs E. A Ryan a British airways loader/driver employed by BEA having been notice to quit furnished rooms in Chiswick. 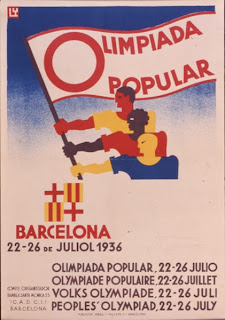 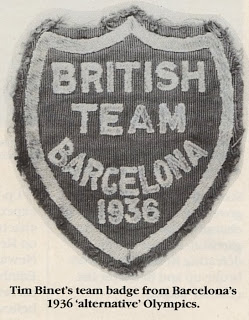 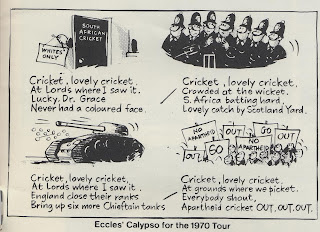 Apartheid backed cricket tour 1970 was canceled when the Cricket Council reversed a decision to allow South African cricketers to tour England in summer of 1970.


The move follows strong pressure from the Home Secretary, James Callaghan and campaigns by the Anti Apartheid movement
Posted by Michael Walker at Sunday, October 27, 2013 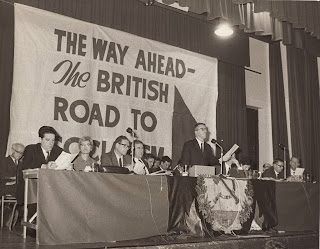 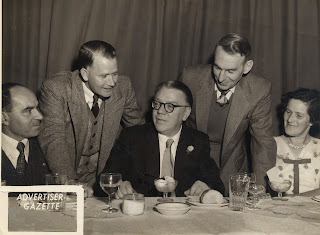