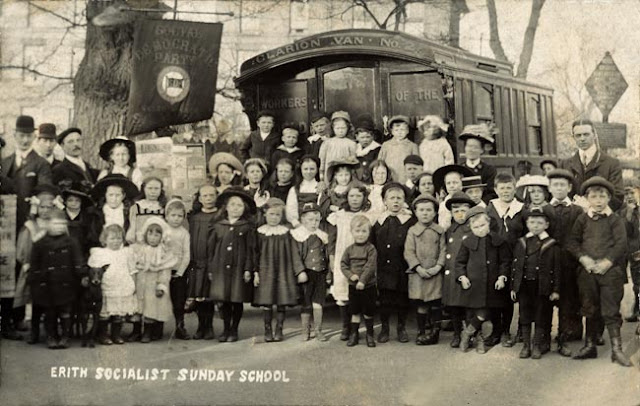 Slogan on back of the Clarion Van Workers of the "World unite"
Posted by Michael Walker at Wednesday, May 29, 2013 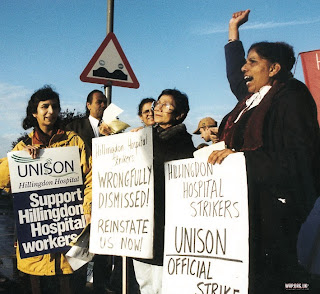 Workers at Hillingdon Hospital are threatening strike action after being told they will be sacked if they do not agree to work longer hours for less money.

Private contractors Pall Mall Services handed out letters last Friday to about 80 cleaning, cooking and portering staff, threatening them with redundancy if they had not accepted new contracts by 30th September 1995.

"Everyone here is angry and frightened. This is worse than our worst fears of what would happen .

"We we  holding a meeting on July 25th. I should like to think we will go for a strike ballot, but its down to the members."

The sack threat follows three months of pressure on staff to sign up for reduced   pay and conditions.

Shift porters on £4.64 an hour are being asked to go down to £4:27. Other staff face losing up to ten days holiday a year.

About 30 workers escaped the ultimatum because they had already signed new contracts and earned one-off bonuses of up to £1,000.

In a letter to staff the company said the cuts and other changes in working practices were needed so it could "meet contractual requirements".

Cllr Smith said the company had tendered too low to win the contract and wa now trying to "claw back the money from workers.

He also accused the hospital's managers of betraying staff because they have stayed neutral in the dispute.

They promised last yes workers would not suffer under Pall Mall

Hospital chief executive Philip Brown, denied he had misled staff when he told them last July conditions under the private contractors would be "no less favorable than currently enjoyed"

But he admitted he had known it was always likely the company would try to make changes about a year after it took on the workers from the hospital.

He refused to become involved in the dispute even though Pall mall had not consulted him before making the redundancy threat. Pall Mall declined to comment. 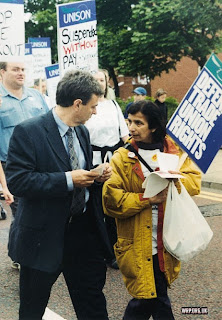