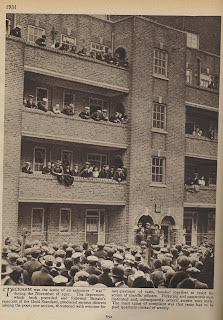 Born in Peckham in 1908, Alf joined the Communist Party in its founding years.

He was a local organiser of the National Unemployed Workers Movement and a comrade of Wally Hannington.

Amongst many struggles, he was involved in the occupation of the Cafe Royal by the unemployed and a number of fierce battles with the police in Hyde Park in the 1930s.

More notably, Alf organised the first successful rent strike of the period at the privately run Nigel Buildings, triggering a wave of tenant’s action in working class London boroughs and beyond. 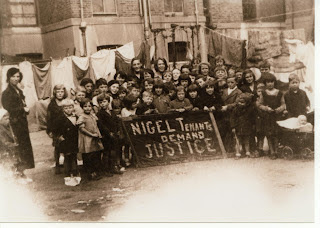 The first decisive tenants’ battles had been in 1915, when a mass rent strike on the Clyde sparked a major movement across Britain, which was especially led by women. In the run up to the end of the First World War major actions followed in Leeds and Bradford followed suit. Within a year rent strikes were being called across Britain.

When strikes were called in Woolwich and parts of south London, in Handsworth and Lozells in Birmingham, munitions industry bosses were so worried that they forced Lloyd George to order local rents to be reduced. Some 1,000 tenants struck in Edmonton, and protests in Barrow against evictions led to copycat actions in Workington and Coventry. This movement won the first legal controls on landlords raising rents. The next decade saw a major growth in the social housing sector, which for a time diminished the need for such major tenants’ actions.

The Communist Party had been at the heart of this struggle fifteen to twenty years before Alf joined the Party. But, as a youth, he surely would have been more than conscious of the experience of the generation before him. As the recession bit hard in Britain, from 1931, private tenants saw racked rents and insufficient investment made slum conditions worse. The London Communist Party in particular once again thrust itself into tenants’ struggles and scores of epic struggles ensued.

This new phase began with the struggle to improve the lot of the tenants of the privately owned Nigel Buildings. These were a notorious run down series of tenement blocks that were infested with vermin in Peckham, south-east London, now in the borough of Southwark.

The landlord increased the rent by a penny a week and so Alf organised the tenants to withhold their rent. Barricades against the bailiffs were erected around the buildings and local people organised to bring in food and supplies. After several months (one source speaks of the longest of such strikes being of 21 weeks during, and this may well be the Nigel Buildings affair), unsuccessful attempts by bailiffs and police (including mounted police) seeking to storm the barricaded tenements, the landlords gave in and reduced the rent. Alf was arrested and imprisoned for assaulting a bailiff at some point in the struggle

.
Copycat actions now spread across the capital, especially in London’s East End (Stepney). Women once again were at the heart of the tenants' fightback, during the course of which the Communist Party helped local tenants fight against slum conditions and extortionate rents. Future Communist MP, Phil Piratin, wrote, “Tens of thousands of working class men and women had organised themselves for common struggle ... committees were formed, and hundreds of people who had never been on a committee and had no experience of organisation or politics learned those things, and learned them well.”
Following Nigel Buildings, it became the norm in tenants’ struggles in London to barricade the housing blocks to keep out rent collectors, bailiffs and the police. Sentries were posted day and night. Tenants defended themselves with saucepans, rolling pins, sticks and shovels. The rent strikes were epics and gained national publicity, resulting in a wave of emulation around the country. A government feeling vulnerable on the eve of war once again had to give in to tenants' demands. Rents were cut and evictions halted

.
A few years later, militant rent struggles were emulated by the Communist Party in Birmingham amongst thousands of council house tenants in 1939, and reprised in London and throughout the provinces in the squatters’ movement immediately after the end of the war in 1945.
Aside from his role in the tenants’ movement, Alf was also part of the Communist anti-fascist organisation at the battle of Cable Street. He also helped to organise anti-fascist actions in Camberwell and Peckham against Mosley’s Blackshirts and William Joyce (Lord Haw Haw). He always enjoyed telling the story of how Joyce, when climbing on a lorry to speak at the Heaton Arms in Peckham, was swiftly felled by a flying bottle and carried off unconscious never to return. I suspect it was he that threw the bottle at Joyce but he would never admit it! 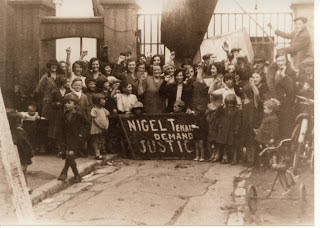 Around 1935, after accepting a challenge from the local Tory MP to go to the Soviet Union he was offered a one way ticket! Alf travelled overland to Moscow and attended a reception within the Kremlin. He met Kalinin and Dimitrov, a fact of which he was very proud, and often recounted the story of how Stalin entered the room and walked by smiling. Alf joined a British trade union delegation in Red Square to watch a Red Army parade. He also met a young Mao Tse Tung on the platform. On returning to Britain, he had to travel secretly across Nazi Germany with the help of German CP members. Whilst in Hamburg, he was nearly captured by the Gestapo and was smuggled across the North Sea on a tug.

After serving in the RAF during the war, as a skilled carpenter/joiner in the post-war period he took part in many industrial disputes as a shop steward for the Amalgamated Society of Woodworkers, and was blacklisted on several building sites. Alf supported the Soviet Union over the 1956 Hungary and 1968 Czechoslovakia events, believing that an enemy of the Soviet Union was an enemy of the working class.

A firm Marxist-Leninist, he was not a great lover of the “British Road”, arguing that the capitalist class would never give up power by peaceful means. A lifelong reader and supporter of the Daily Worker and Morning Star, Alf passed away aged 84 in 1991.

In 1931 a Workers Defense Movement (a left wing grouping) was established in Camberwell it was active in preventing evictions, most notably during the 1932 Rent Strike at Wakefield House, Goldsmith Estate, Peckham. The Camberwell WDM was also active in support of Hunger Marchers and unemployed.

The leader of the Stepney 1938-1939 strikers was Communist Councillor Maurice "Tuby" Rosen. the Stepney Tenants Defence League (STDL) had been established in 1936. with sporadic strikes from 1935

Tubby Rosen was also involved in the Communist inspired squatters movement after the War, notably at Duchess of Bedford House, Kensington High Street on September 8th 1946. This resulted in a famous Old Bailey court case against the leaders, Tubby Rosen along with Bill Carritt, Joyce Alergant, Stan Henderson and Ted Bramley October 30th to 31st 1946. 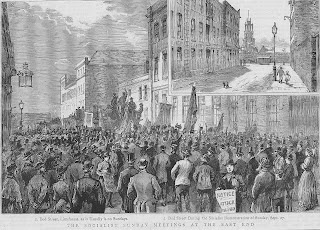 The Social Democratic Federation had been established in 1881 as Britain's first avowed Socialist Party. In 1884 a group which included branches from East London, Hammersmith and Leeds broke away and formed the Socialist League with William Morris, Ernest Bax, Edward Carpenter, Edward Aveling, Walter Crane and Eleanor Marx as some of its most high profile members of the Socialist League. 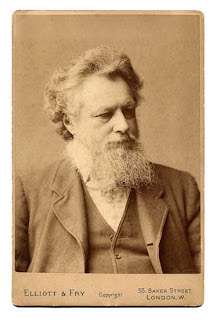 It was while leading the Socialist League that William Morris had become embroiled in the exploits of the Free Speech Vigilance Committee, formed with the Social Democratic Federation, the Socialist League and the Radical Union to defend their right to speak at what had become a traditional spot, at the corner of Piggot Street and Dod Street at Limehouse, East London. This densely populated factory area of East London was usually deserted and quiet on Sundays, and the open space afforded an ideal venue for open air meetings. Several leading lights in the socialist world addressed the crowds at Dod Street, including Edward Aveling, Eleanor Marx and Lewis Lyons, Jewish Tailors’ Trade Union leader.

On 20 September 1885, at the end of a meeting, the police launched a violent attack on the speakers, arresting and charging eight men, among them Jack Williams and Lewis Lyons. The hearing was set for Tuesday 22 September. Morris wrote to his wife, “I did not go either to the East End meeting or the Parks on Sunday: but, as you will see by the papers, I felt bound to go to the police court today. My adventure there is pretty well told by the Daily News and the Pall Mall I send you.”

At the Thames Police Court, Edward Aveling and Eleanor Marx gave evidence on the men’s behalf, nevertheless Lewis Lyons was sentenced to two months imprisonment. Morris, as he mentions in his letter above, was in amongst the spectators who cried “Shame,” when the sentence was passed. He immediately found himself under attack as the police turned their attentions on him, and two hours later he was in Thames Police Court in front of the magistrate on the charge of disorderly conduct. When the magistrate, Mr Saunders asked, “Who are you?” Morris replied, “I am an artist and a literary man, pretty well known, I think, throughout Europe.” This reply evidently impressed Mr Saunders who dismissed the charges against him. 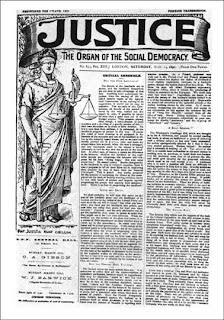 This episode served only to strengthen the group’s resolve to defy the law and the next Sunday (27th September 1885), an estimated crowd of sixty thousand people turned up in Dod Street to hear Edward Aveling and Eleanor Marx, amongst others, speak. So great was the gathering that it spilled over into East India Dock Road and down West India Dock Road.

This time the police kept away, on the orders of the Home Secretary, who did not want an incident which could be used to the advantage of the Government’s opponents during the run up to the elections, which were being held in November of that year.
Rosemary Taylor

Lewis Lyons a member of the Social Democratic Federation was the leader of the 1889
"Great London Tailors Strike". This strike was amongst 6,000 Jewish tailors in the East End. Their strike headquarters was at the White Hart, Public House, Greenfield Road.

The strike began on the 29th August 1889 and received £100 donation from the Dockers also on strike. A huge march to Hyde Park was organised by the tailors.