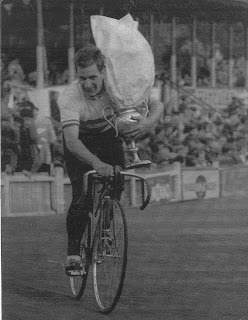 John "Johnny" Ralph was a champion cyclist and a committed Communist Party member.

He was born on 6th October 1931 at Hammersmith hospital and his family lived locally in the Acton and Hammersmith area. His father was Fredrick Ralph, a motor fitter for Wimpey, and his mother Bessie originated from near Poole, Dorset.

At the start of World War Two, he and his sister were evacuated to Dorset. After a period of time, his mother sent him and his sister to live at Johnny’s grandparents. They also lived in Dorset– Johnnie’s grandfather was a fishermen by trade. While in Dorset, he attended school at Shipstall, Wareham, Dorset, which he later recalled was a long walk from his grandparents’ house

When Wimpey’s, the construction company that Ralph’s father worked for, relocated to Denham, Buckinghamshire, Frederick was able to move there. Wimpey had built huts for staff near to the aerodrome. Johnny and his sister joined their father and the boy joined the Uxbridge Wheelers Cycling Club, which had been established in 1936.

It was at this that Johnny met his future wife, Jean Hunter, in around 1948. Jean came from Uxbridge and was a local nurse; she later worked as a manager in Hillingdon Social Services.

Later Johnny undertook his National Service; during this period, he was based at Hendon and spent the majority of his time racing and training for RAF cycling team. He described his national service, unlike many others, as a “cushy number” – although this was not a general experience!

His cycling was going from strength to strength but he needed more track racing experience and subsequently joined the highly prestigious, Regent Street-based cycling club, Polytechnic “Poly” around 1949. This was a large club, with over two hundred members of which half were racing cyclists, knows as “Poly-boys”. The team-kit colours of were a blue based jersey with a red band in the middle and they raced at Herne Hill and Paddington track.

By the mid 1950s, Johnny was working his way up to the very elite of his sport, excelling in sprint and five and ten mile races. He participated in national championships and was a team pursuit champion, while regularly cycling for England.

Dennis Seacombe described Johnny as “very good rider”. This may have been an under-estimation! However his misfortune was to be cycling at a time when the great Reg Harris was at the very pinnacle of his success, for he often overshadowed Johnnie Ralph’s many achievements.

He also had the misfortune of being selected to race for England at the Empire games in Cardiff in1958, but a puncture robbed him of that opportunity for victory. Worse still, because of this injury, Johnny was not able to work for a living and Polytechnic agreed to make a relatively small donation to his wife to help them make ends meet.

He represented England at events in Germany, Denmark and France and he was a member of the "Poly" team pursuit team that won the national team pursuit in 1957

But this was to prove a bitter pill for Johnny. He had joined the Communist Party and now wished to ride for the famous socialist Clarion Cycling Club. But the Polytechnic Club demanded the repayment of the donation and, when Johnny understandably refused, the Poly Club went to the Cycling Unionto ban him from racing. They were able to pull this off, leading Johnny to feel that all the power in cycling was concentrated in the hands of those with “the right hand shake”, a reference to Masonic influences.

Despite the ban on him racing, Johnny continued training younger cyclists at his favorite track, Palmer Park, Reading, one of the oldest in the country.

In the 1950s, John secured a job at Fairey Aviation at Park Way Hanger Lane, later moving to Fairey, Hayes, West Middlesex. Whilst there, Johnny met a number of leading Communists who worked for Fairey, such as Frank Foster and John Mansfield. However, as Johnny was working on a guided missile system, the company was less than pleased when Johnny announced he was visiting the GDR (East Germany) to compete in a cycle race.

Totally out of the blue, Johnnie was offered a job at a small company on much better terms and conditions. So, he left Fairey but when he arrived at the new company the potential contract and job had mysteriously disappeared. Johnny then tried to secure his old job back at Fairey Aviation but soon realised he had been `blacklisted’. From then on, he recalled, he would often secure a new job, only to be told later that his references were not acceptable. In the end, despite being a skilled man, he was forced to undertake window cleaning to earn a living. Later, he secured a job with the LondonCo-operative transport maintenance department based at Yiewsley and then a post back at Taylor Woodrow.

Johnny Ralph had been greatly influenced by a fellow Uxbridge cyclist and West Drayton trade unionist, a veteran committed socialist, Bob “Digger” Downs. There were many others, such as Communist cyclists like Fred Riley of Slough, a Communist Party full-timer; Harold Goodwin, a former merchant seaman and Party member; Bob Bragan, a Geordie and Communist teacher at Harlington Primary School, and his wife, Edith, who hailed from Birmingham. There was Stan & Nora Emeversley of Ivor; Stan being a former South Walesminer who was suffering from pneumoconiosis. Harold Thomas was another, and there was Dickie Bond, who had cycled in the Workers’ Olympics in the 1930s. (See separate entries for many of these personalities.)

Johnny sold the Daily Worker and later Morning Star on a regular basis on Saturdays outside the Uxbridge tube station, as well as standing as a Communist Party candidate for Hillingdon East. Along with many progressives in Hillingdon in his later years, he worked for John McDonnell, MP, from when he was first a councillor for Hayes.

On 8th July 1984, Johnny and his eldest son Stephen went for an early morning ride while on holiday in Dorset. When descending Corfe Castle, he was involved in an accident with a car and caravan which had failed to see either him or his son. As a result, Johnny Ralph was severely injured, tragically dying in hospital on the 11th July 1984.

He was cremated at Uxbridge and his funeral was very well attended by local dignitaries, including leading trade unionists and Communists such as Mike Hicks (Print Union - living in Hayes), Fred Riley, and Harold Goodwin.

Later an Uxbridge pedestrian and cycle crossing – possibly in Cowley Road– was named after Johnnie. Surprisingly, but much to his credit, local Tory leader of the council, Andrew Boff (now a GLA member), who had known John and his son, was associated with this.

Tragically, one daughter (Lisa) was killed as a pillion rider on a motorcycle. Johnnie’s oldest son, Stephen, has gone on to a successful career in computers and another son is a director of youth and community services.

His wife, Jean, who went through all the tribulations of Johnny’s many victimisation's as well as his triumphs, continued to be an ardent defender of her husband’s memory.

Many thanks and apologies to Jean Ralph for corrections

Palme Dutt - What is Fascism 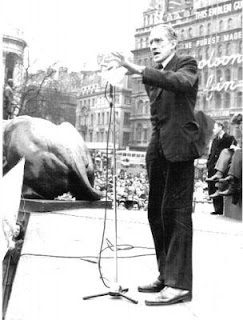 said Sargent Jim Allen of Heston as he embarked to take part in driving fascism from Europe, quoted in the introduction to the Hounslow Communist Party Plan 1945

This booklet has a contact address for the CP as 11a Devonshire House, School Road, Hounslow

In connection with the Heston Ward contest, a copy of correspondence between Heston & Isleworth Divisional Labour Party and Heston Communist Party has been sent to us by Mr E. Warmington, secretary of the latter body.

In a letter to the Communist Party on October 18th, Mr W Chamberlaine, Labour Party secretary and agent, stated :-

“Some time ago we received a communication from your organisation requesting that a joint discussion take place on the desirability of a united effort of the two parties in connection with the municipal elections. We replied to the effect that we wished to work to the wishes and constitution of the National Labour Party as laid down by its conference from time to time. We were of the opinion that this reply fully answered your request. It has, however, come to our notice that a statement has been made by members of your organisation to the effect that an arrangement has been arrived at between the Divisional Labour Party and the Communist Party to fight the election jointly within the Heston Ward. Your workers have suggested that it is the desire of this party that the electorate return one Communist and one Official Labour Party candidate. You are fully aware that this is not the case and we regret to have to point out this statement is a lie, and we request that this statement be rectified publicly immediately. We consider this matter a most serious breach of faith and should our request not be acceded to, we shall feel disposed to discuss the question with higher authority. We feel your statement will have anything but the effect apparently desired and, to quote your own well-worn phrase ‘in the interest of working class unity’ trust you will not delay in clarifying the matter and assuring those electors you have so basely misguided of the true state of affairs.”

“In reply to your communication of the 18th inst, I am only too glad to draw attention to the following points which have been strictly adhered to by our canvassers and at our public meetings at the Council House on October 4th and Berkeley School on October 17th:

We deploy the attitude of the Labour Party in refusing to meet the Communist Party with regard to an agreement during this election in order to avoid any splitting of the vote.

At the same time we decided to withdraw our candidates in the other wards to allow the Labour Party to attain their majority on the Council, which we know is absolutely essential.

We contest Heston because it is a ward less likely to damage the vote than any other, as no Labour Party councillors are retiring.

It is essential that the Communist Party have representation in local government owing to the growing section of the public which now support it, the vast number of problems, housing, etc, which must be attacked and for which we have a policy.

We ask the electorate to give one vote to the Communist Party, and the other to Labour, as we stand one candidate only and they have two votes. This has been our policy throughout the campaign and it will continue to be so. We are confident that no other statement of fact has been made by our representatives for which we have ample evidence.

The Election Result in Heston

The Conservatives 1 and the Ratepayers 1 and Labour gained control of the council.