An agitator to the end

A comrade once remarked to me with a certain degree of irony that the left just mouths off about class war, while the Tories actually practise it. He had a point.

In 2012, after two years of incessant and unrelenting class war, it is becoming clear that the ruling class under the thumb of international capital is intent on turning the screw still further.

Where should socialists turn to for inspiration? What tools can we use in our struggle?

Part of the answer may lie in a older radical tradition exemplified by Noah Ablett and the causes he espoused.

A working miner, syndicalist, teacher, scholar and autodidact steeped in classical Marxism and the language of class war, part author of The Miners Next Step, Ablett was also instrumental in the founding of the Plebs League.

A working miner for the majority of his life, his descent into alcoholism and his subsequent death at 52 robbed the labour movement of one of its most influential and charismatic figures at a time when his influence should have been most keenly felt.

He died in October 1935 following a long battle with cancer.

Such was his influence that miners' union leader Will Lawther referred to Ablett as "the greatest pre-war Marxist" - and yet today his influence is all but forgotten.

Ablett's legacy rests on his uncompromising attitude to class conflict which was personified in his rejection of the moderate policies of the South Wales Miners Federation under William "Mabon" Abraham.

This was a stance which led to the formation of the Unofficial Reform Committee and publication of the Miners Next Step in 1912, a document which became a landmark within the labour movement for its embracement of syndicalism and its rejection of consensus politics following the Cambrian combine strike of 1910.

In 1907 he won a scholarship to Ruskin College, Oxford, via the South Wales Miners Federation.

It was here at Ruskin that Ablett began leading unofficial classes in Marxist history, philosophy and economics.

The students at Ruskin, many of them also influenced by de Leon and the personality of writers such as Tom Mann, were asked to end their unofficial classes.

They refused and a stand-off ensured which led to the principal Dennis Hurd being sacked.

The students formed what became known as the Plebs League after de Leon's book Two Pages From Roman History.

Hurd, who had supported the students, went on to become principal of the Central Labour College which had as its motto, Educate, Agitate, Organise.

The main aim of the college was to counter what was perceived to be the bourgeois ideology of mainstream education as was being taught by the Workers Educational Association at the time.

The movement for Independent Working-Class Education which grew out of the Plebs League was summed up in the first edition of its educational magazine The Plebs.

"We want neither your crumbs nor your condescension, your guidance nor your glamour. Your tuition, nor your tradition. We have our own historic way to follow, our own salvation to achieve, and by this sign we shall conquer."

The motto of the Plebs League may well serve as an fitting memorial to Ablett's life and career.

The ideas for which he fought, most notably in the field of education, are ideas that are just as relevant today.

At a time of mass unemployment and lack of educational opportunities for young people, it is as well to remind ourselves that education is a right and not a privilege.

Ablett was just one of many young men who were prepared to bring capitalism to its knees in pursuit of a better world.

History records Ness Edwards, AJ Cook and Nye Bevan, yet somehow Ablett stands alone in that time of industrial and social turmoil as an agitator and educator. 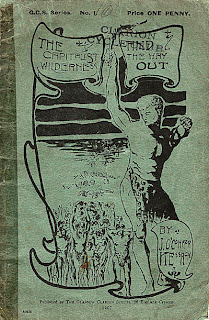 Henry Hyndman speaking to British Socialist Party/Glasgow Clarion Scouts meeting January 1912 at the Pavilion Theatre. Presiding R.A Lister apologies from R.B. Cunningham. Hyndman "I am not an an anarchist; I do not believe in blowing up or shooting capitalists, I do not even think strikes were the best weapon, though he had never failed to support strikes once they had were out. "I do not like the idea of 600,000 miners striking merely for a minimum wage" "If men were simply going out for betterment of wages, they did not alter materially the conditions under which they worked" "However If they held out for a social reorganisation which would uplift all then every man, women and child would be with them" Source Glasgow Herald January 1912 NOTE: Lawrence Strike (America) - "Bread & Roses strike" started during the same period January 1912


The Lawrence Textile Strike was a strike of immigrant workers in Lawrence, Massachusetts in 1912 led by the IWW or Industrial Workers of the World. Prompted by one mill owner's decision to lower wages when a new law shortening the working week. Famous American Hellen Keller a committed socialist was active in support of the workers and the IWW. 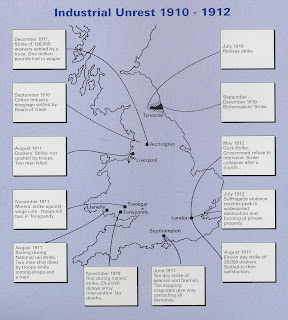 Click to enlarge
Posted by Michael Walker at Thursday, March 01, 2012