Frank Stanley was born in 1920 in Acton. His father was an active trade unionist and steward. At the end of life in his junior school, Frank won a scholarship to the local Grammar School. But, because his father was unemployed at the time and unable to afford the loss of wage to the family, or the cost of a uniform, he was unable to take his place and eventually left school at the age of 14.

In 1937 he joined the Young Communist League and in 1940 became a full member of the Communist Party, in the same year he married his wife Joan who he met through the YCL and with whom he would have two daughters.
From 1942-1946 he served in the R.E.M.E. (14th Army) for three and a half years in Burma and became a Warrant Officer. An instrument maker by trade, he started work at EMI Hayes in 1950 and became an Amalgamated Engineering Union (AEU) steward the following year. From 1959 he was AEU convenor and Secretary of the Joint Stewards Committee, negotiating on behalf of 6,000 workers at EMI.

In February 1962 a one day strike took place at EMI at which a number of scuffles with police broke out. The local MP was to state that, in Blythe Road, Hayes, the police "appeared to encourage them to drive at the pickets".
That March 700 AEU members marched from Hayes to Southall protesting at the Government imposed a"Pay Pause". They were addressed by Mr Sheeny
convenor at Alladin's factory. The local paper refers to a Wally Hannington, a retired Jarrow engineer being present on the march. This must be Wal Hannington (1896-1966), former AEU and National Unemployed Workers Movement organiser (See entry for Hannington).

Stanley was Chairman of West Middlesex District Committee of the Communist
Party and national chair of the Communist Party’s Central Committee and was a pallbearer at Willie Gallacher’s funeral in 1965.
Frank Stanley, lived in Hayes and was the Communist Party candidate for
Hayes and Harlington constituency on a number of occasions, in his first attempt in the General Election of October 1964, standing on a platform of:
1) Put yourself before the Monopolies and land speculators
2) Vote to abolish nuclear weapons
3) Break the American grip on our country
He also featured a campaign for a branch line linking Hayes with the Central or Piccadilly Underground line). Frank and the local Communists canvassed over 16,000 houses in Hayes during this election and John Gollan, Communist Party general secretary, spoke at his adoption meeting on Monday 14th September at the Civic Restaurant, Coldharbour Lane.

Frank Stanley was also active in the promotion of the Trades Union Congress inspired Centre 42 arts programme in 1962 (named after the arts resolution number on the agenda at TUC Congress), Centre 42 "aimed to provide an outlet for cultural ambitions and entertainment of the ordinary person" The public face of which was Arnold Wesker and toured Britain visiting Hayes and Southall November 19th - 24th, 1962, this stop included the first presentation of "Enter Solly Gold" by Bernard Cops, a Youth Theatre production of "Hamlet", Music Theatre presented "The Soldiers Tale” and the "Nottingham Captain", a Jazz band, poetry reading, photograph exhibition, drawings, folk singing including Ewan MacColl and Peggy Seeger.
Frank moved on retirement to Banbury, Oxfordshire.
Michael Walker
Posted by Michael Walker at Sunday, October 08, 2006 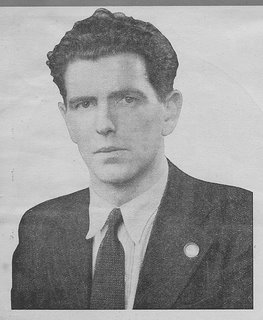 Frank Foster was born in Bermondsey, South London July 1914, into an active socialist family, and joined the Labour Party in his youth.
He joined the Communist Party in 1939 and lived at South Road, Southall. He spent the war years at Fairey Aviation working as an engineer in the tool room, along with John Mansfield.

He was involved with the "Propeller” (the Communist Party’s journal for aviation manufacturing workers) and was elected Fairey convenor of stewards for the engineering union.

Chairman of Hayes No: 3 AEU and member of Southall District Committee

He won much acclaim when he tried to improve production during the war and, according to John Mansfield, “turned over management” to such an extent that Stafford Cripps MP came down to investigate. His leadership led to the CP having a membership of 20 out of the 75 staff employed in the toolroom at Fairey. Later he moved to Feltham where he was also elected convenor.

“He hardly ate a thing but smoked heavily”, said Peter Pink about him
Foster, along with Bob Good (EMI union convenor), was considered the driving force of the local Hayes Communist Party. Foster became Secretary of Hayes Communist Party in April 1943. He was very popular choice as full time West Middlesex Communist Party District Secretary in the 1950s. He regularly stood for election at local and national elections for the CP and was Hayes & Harlington parliamentary candidate in 1950, 1955 and 1959.

Foster was married with two children and ended up living on a barge on the Thames but died relatively young.


NOTE:
Along with John Mansfield probably the most popular and influential Hayes Communist