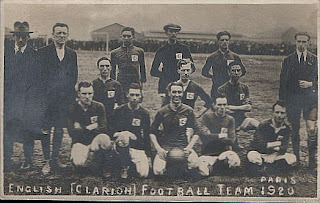 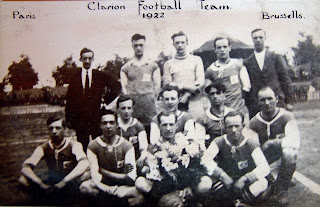 THE International Workers' Federation for Physical Education and Sport, has for its chief object the substitution of the spirit of sport for the spirit of militarism. In place of deadly strife on the battle field, it seeks to promote a healthy rivalry on the fields of sport. For cannon balls, it would substitute footballs ; for trench warfare, tennis tournaments; for submarine fighting, swimming galas ; and that when the workers of the world shall confront each other in mass formation it shall be as friendly competitors in massed physical-drill displays, rather than as foes seeking to kill and to maim.

What is this but a modernised version of the old dream of beating swords into ploughshares and spears into pruning-hooks ? And lest the modern dream should seem too fantastical for serious consideration, let us quote from an article by Sir lan Malcolm, K.C.B., dealing with the growth of athletic and sporting clubs in France :— And, apart from the executants, sport has taken a real hold upon the French public, who flock in their thousands to every first-class " fixture," and follow the match with all the enthusiasm of an English crowd. Here we move into an atmosphere of international comity ; speaking and thinking in a kind of Esperanto, the sportsman's lingua franca, which obviates misunderstandings and is comprehended of all nations as easily as the humour of Charlie Chaplin.

Can it be that in the future an international federation of athletic clubs will play a striking part in the pacification of the world ? If so, the League of Nations should be up and doing, and should initiate a " Sports Department" on the banks of the Lake of Geneva ! Here, in the jargon of the day, is " an avenue of peace that might well be explored."

It is precisely in this spirit of seeking to " play a striking part in the pacification of the world " that the International Workers' Federation is moving. Whatever motive it may be that brings the peoples of the world into friendly rivalry it will, by just that much, help to break down old enmities and to remove the prejudices that arise from ignorance. And the true sporting spirit makes, perhaps, a more widely popular appeal to-day than any other single motive. 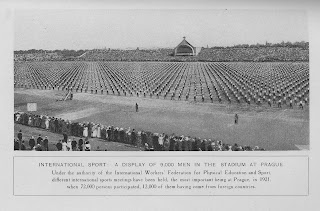 It was in 1913, and at Ghent, Belgium, that the preliminary conference for the purpose of forming an International Workers' Federation for Physical Education and Sport was held. At that conference were represented Belgium, France, Germany, Italy, and England. The discussion was voluble and discursive, but the underlying motive of all the speeches was the desire to oust the spirit of militarism and in its place to substitute the spirit of fraternal sport. A tentative constitution and many pious resolutions were considered.

* The address of the International Secretary is 44 Worship Street, London, E.C.2.


All were referred back to the constituent bodies for further consideration and for definite adoption at a second conference to be held the following year, at Frankfort-on-Main.

Such international gatherings as were held in 1914 were anything but fraternal in character, and the International Federation looked like being still-born. But the Armistice of 1918 had hardly been signed when the International Bureau sent out invitations to all for a renewal of friendly relations. The meeting was held in Seraing, near Liege, in 1919 ; but owing to the great expense of travelling in that year, and to the difficulties of obtaining passports, Belgium, France, and England alone were able to be represented. Definite action was postponed until 1920, when, at Lucerne, France, Belgium, England, Germany, Austria, Czeoho-Slovakia, Finland, and Switzerland sent representatives and the constitution was agreed to.

GROWTH OF THE FEDERATION. 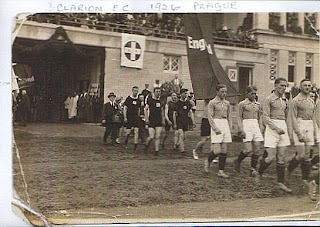 In the meantime, the Federation had been expanding. At Ghent, in 1913, there were but five nations at the inaugural meeting. At Lucerne there were eight nations, representing a total of 770,000 members (as against 242,000 in 1919) ; whilst to-day there are seventeen nations, with a total affiliation of over a million and a half.

The following list, recently supplied by the International Bureau, gives the names of the adherent countries and numbers of affiliated members for each :—

Without actually being the lowest in the list, in point of numbers, England, -with its importance in the comity of nations, and with its sporting traditions, is far too low. If through international sport there is any hope of reducing the chances of future wars being waged, then it is our duty to give such support to this new movement towards peace as is possible. The comparatively rapid growth of the Federation under surely the most adverse circumstances, would suggest that it has the hall-marks of success. And the work it has already accomplished lends encouragement.

Since its formation numerous international sports and athletic gatherings—as between individual nations—have been held, and three international Olympiads have been authorised by the International Bureau. Of these latter the most important was the one held in Prague, in June, 1921. Its importance lay in the fact that it was held so soon after the war, and that the invitations, sent out by the Gymnast Association of Czecho-Slovakia, were so warmly responded to. Upwards of 72,000 athletes gathered together in the great stadium, specially erected for the purpose, and of these at least 12,000 were from foreign countries. In the perfect cordiality with which the Czecho-Slovakians welcomed their guests, and in the warm fraternal spirit with which the various representatives from the different nations co mingled—nations that had but recently been flying at each others throats—lay the great significance of that 1921 Olympiad.

Last year, in Leipzig, the German Workers' Gymnast Clubs entertained 3,000 worker athletes from other countries, and upwards of' 16,000 athletes took part in the great march past.

During the present year (1923) international sports meetings in Switzerland, France, Germany, Belgium, Czecho-Slovakia, and Lithuania have been sanctioned by the International Federation. To each and to all of these gatherings some representatives of the various nations affiliated, with the exception of England, have been sent, for the purpose of demonstrating their belief in this new endeavour towards international fraternity.

But England has not been entirely lacking in its support to the new movement. When, in 1912, the first tentative invitations to help in the formation of the Federation were sent out, the only working-class athletic society in this country with any pretence to a national organisation was the Clarion Cycling Club.

That club accepted the invitation and, so far as its poor means allow, has endeavoured, both nationally and internationally, to strengthen the cause for which the International Workers' Federation was formed. By the sending of football teams, cyclists, swimmers, and runners to France and to Belgium, and by entertaining, in this country, football teams from France, it has done what it can to forward the objects of the Federation. But it is too weak, both in membership and in finances, to keep in step with the rapid advance made by the Federation on the continent.

And in no case can it ever claim to be truly representative of the working-class movements in Great Britain. At most it can but hope to hold the position until the general Labour and Co-operative movements of this country recognise the value of this endeavour towards peace by substituting the spirit of sport for the spirit of militarism.

The co-operative movement is essentially a peace-loving movement. The common aim of co-operators the whole world over makes for fraternity of interests. On the continent the co-operators have interested themselves whole-heartedly in the work of the International Federation. They recognise that the future of co-operation, and the welfare of the workers generally, depends upon securing the interests of the young. Youth demands the healthy recreation that sports and athletics give. The continental co-operators cater for that demand, and, by affiliation to the International Federation, are helping to bring the youth of the various nations together in friendly sportive rivalry, and by so doing will help to clear the way of those international prejudices and misunderstandings that make wars possible.

With the exception of a few isolated sports clubs and tennis clubs —and these for the most part formed by employees—the British co-operative movement has done nothing at all in the way of physical education for its younger members. Most certainly there is nothing in this country to equal, or even to approach, the magnificent gymnast organisations for which the movement on the continent is responsible. Yet here, surely, is an opportunity which should be exploited.

In September, 1924, at Ghent, is to be held an International Co- operative Exhibition. An invitation to take over an English team of footballers, to play in a series of international matches, to be held during the Exhibition festival, has already been sent by the Executive Committee of the International Workers' Federation for Sport. The acceptance of that invitation will depend on funds being available. -But the purpose of that visit would be immeasurably strengthened if the national organisation of this country could be made to include representatives of the British co-operative movement.

In August 1925 at Frankfort-on-Main, is to be held a great Workers Olympiad. It is quite safe to say at least 20 nations will be represented at that Olympiad. Whether England, the birthplace of co-operation, of trades unionism, and the home of sport will have its representatives there will depend on whether the co-operative and Labour movements of this country are prepared to take their part in the endeavour to substitute sport for war.

Were these gatherings merely sports gatherings they might be treated with comparative indifference. It is because of the purpose behind them that they gain importance. It is because of the conscious and avowed endeavour to combat militarism with the healthy friendly rivalry of sport that the International Workers' Federation for Physical Education and Sport demands your help.

For the present the National Clarion Cycling Club is the officially recognised affiliated body in this country to the International Federation. A Scottish federation and a London group has been formed. So soon as the interest in the movement warrants, a British Workers' federation for Sport will be formed and affiliated to the International Federation.

The Federation was formed in 1913. For five years its work was interrupted, yet to-day it is receiving an ever-widening and an ever-increasing support. This is a call to co-operators to help forward a movement that cannot fail to have a beneficial effect in bringing about greater friendliness among the peoples of the world, and because of that to postpone, if not to abolish altogether, the possibilities of war.