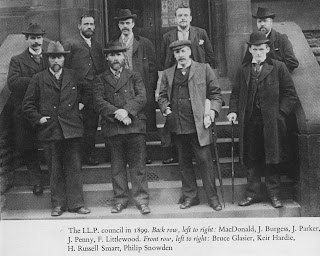 France Littlewood, France attended the founding conference of the ILP in Bradford in 1893, beginning an allegiance to the party which lasted thirty five years. He was appointed one of the auditors and in 1896 became national treasurer and a member of the party’s National Administrative Council (NAC).November 1891, the committee of the newly formed Colne Valley Labour Union (CVLU)

In March 1892 George Garside, a Slaithwaite born blacksmith and founder of Slaithwaite Social Democratic Club was elected to West Riding County Council for what was essentially the current Colne Valley electoral ward. He was the first socialist (Labour) candidate to gain a seat on a County Council in Britain and won in a straight fight against the Liberal, gaining 55.1% of the vote. He sat as a ILP Labour County Councillor until his death in 1907 aged 63. 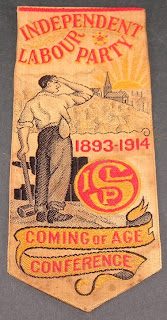 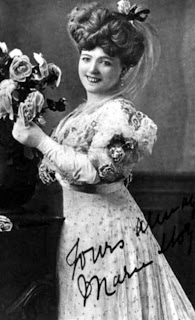 Known as the Queen of the Music Halls, the comic singer Marie Lloyd (1870-1922) had strong trade union principles.

Marie's risky interpretations of the most innocent of lyrics led to frequent clashes with the guardians of morality. Her performances also articulated the disappointments of life, especially for working-class women.

Marie's first major success was "The Boy I Love is up in the Gallery", and she quickly became one of the most famous of English music hall singers.

Despite her own success she supported other performers she was a passionate trade unionist and was elected as the first president of the Music Hall Ladies Guild in 1906. In the following year, called a meeting to form an alliance with the Variety Artists' Federation, the National Association of Theatrical Employees and the Amalgamated Musicians Union.

This alliance called a music hall strike to resist management attempts to make artists who were lower down the bill do extra matinee performances for no extra payment during the famous Music hall war of 1907, It also tried to stop them making more money by performing at rival theatres.

As a top of the bill star, Marie was not directly affected by these worsening conditions, but her sense of solidarity with her fellow artists prompted her to fully support the strike.

"I will never go back upon the music hall stage until the wants of every musician and stagehand are satisfied," she declared.

She was on the picket line at the Euston Palace, where the strikebreakers included performing animals and singer Belle Elmore, who was later murdered by her husband Dr Crippen.

One of the pickets told Belle not to be a blackleg, but Marie, who had a poor opinion of Belle's talent, shouted: "Go on, let her work. She'll do the strike a lot more good by going on and singing than by stopping out! You go and work Belle!"

When Belle started singing, word got around that the far superior Marie Lloyd was singing for free on the picket line outside. The entire audience streamed out of the theatre.

Marie also played at a strike benefit concert organised by the union at the Scala Theatre in Charlotte Street.

Her evidence to the Board of Trade arbitration body convinced it to rule in favour of the strikers.

An active supporter of voting rights for women, Marie had a small part in a suffragist play at The Oxford on the corner of Oxford Street and Tottenham Court Road in 1909. At one of its performances she smuggled in the militant suffragette Annie Kenney in her hamper through the police cordon so that she could make a speech on stage.

When the first-ever royal command performance was organised in 1912, Marie was excluded. It was assumed that this was punishment for her involvement in the strike five years earlier.

Unperturbed, she hired another theatre nearby on the same night for a rival performance, with placards proclaiming: "Every performance by Marie Lloyd is a command performance - by command of the British public."

The pub is within a few hundred yards from where she was born at 36 Provost Street and went to school on Bath Street.

Thousands attended her funeral and TS Eliot wrote that it was "her capacity for expressing the soul of the people that made Marie Lloyd unique."

Strike of the month: Marie Lloyd and the music hall strike of 1907 Marie Lloyd is best remembered today as the doyenne of music hall entertainers. Her command of double-entendre and ability to give a risqué sexual charge to the most innocent of lyrics made her a huge star, not just in her native London, but around the UK and beyond.

But the woman who brought the house down with the likes of “I sits among the cabbages and peas...” never abandoned her East End roots, and when music hall performers in the capital went on strike in 1907, Marie Lloyd, star of the Edwardian stage, was there at their side.

Until the turn of the century, most music hall entertainers had enjoyed relatively flexible working arrangements with music hall owners. By the Edwardian era, however, terms and conditions were increasingly formal, preventing entertainers from working at other local theatres, for example.

The 1907 dispute began when in addition to the single matinée (afternoon) performance included in most performers’ contracts, music hall owners began to demand additional shows – adding up to four matinées a week to the workload for no extra money in some cases.

The Variety Artistes Federation, established the previous year and with a membership of nearly 4,000 performers, was having none of it. On 22 January, performers, musicians and stagehands at the Holborn Empire walked out on strike.

The dispute would spread to 22 London variety theatres, and saw 2,000 of the Variety Artistes Federation’s membership on picket lines at one time or another.
The dispute was backed by a number of leading performers, including Arthur Roberts, Gus Elen and Marie Lloyd – as well as by the stars of the Edwardian labour movement, among them Ben Tillett and Keir Hardy.

"We (the stars) can dictate our own terms. We are fighting not for ourselves, but for the poorer members of the profession, earning thirty shillings to £3 a week. For this they have to do double turns, and now matinées have been added as well. These poor things have been compelled to submit to unfair terms of employment, and I mean to back up the federation in whatever steps are taken."

For two weeks, the union ran a masterly publicity campaign, distributing leaflets declaring a “music hall war” and hiring the Scala Theatre to put on a fund-raising show.

When the music hall owners responded by engaging lesser known acts and bringing others out of retirement, the union picketed theatres. On one occasion, Lloyd recognised one of those trying to enter and shouted, "Let her through girls, she'll close the music-hall faster than we can."

In due course, the dispute was referred to arbitration – the suggestion apparently coming from the author Somerset Maugham – and Sir George Askwith, concilation officer at the Board of Trade, was appointed to try to find a resolution.

After 23 formal meetings and numerous less formal ones, the resulting settlement produced a national code, a model contract and a procedure for settling disputes. In effect, the performers won more money, plus a guaranteed minimum wage and maximum working week for musicians.

Although the strike ended well, the music hall owners exacted a sour little revenge on Marie Lloyd. Five years later, when the first music hall royal command performance for the music hall was held, vengeful managers excluded the greatest star of the music halls from their line-up. 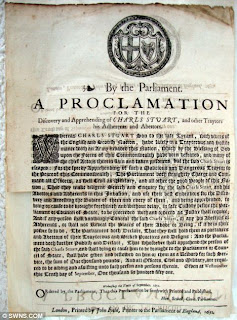 The item, dubbed the ‘most famous wanted posted in the world’, was issued on Wednesday September 10, 1651, after the defeat of the King’s forces at the hands of Cromwell’s New Model Army in the Battle of Worcester a week earlier.

Long Live the Levellers and Diggers

The world turned upside down - Billy Bragg (below click to play) 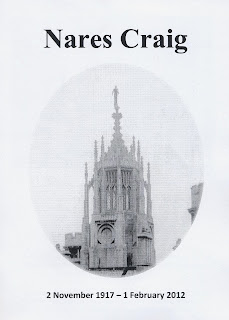 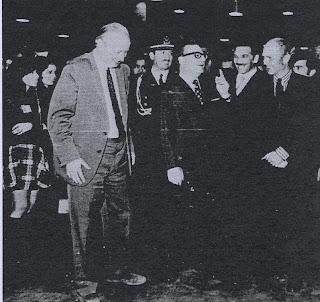 Cameron Nares Craig was born on 2nd November 1917 and the wind that swept Russia. must have also rocked his cot, for Nares despite his privileged pedigree committed his life to surviving the "masses".

Pictures
Nares Craig Cambridge night Climber and with Salvador Allende just weeks before the US backed coup in Chile.

"Man's dearest possession is life. It is given to him but once, and he must live it so as to feel no torturing regrets for wasted years, never know the burning shame of a mean and petty past; so live that, dying he might say: all my life, all my strength were given to the finest cause in all the world- the fight for the Liberation of Mankind." 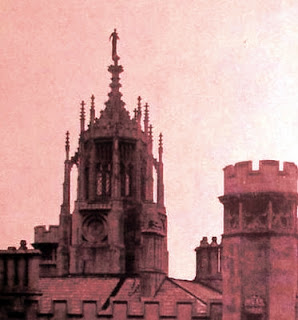 Lucy Craig the daughter of Nares Criag has posted that sadly her father died on Wednesday 1st February 2012.

"As many of you will know Nares had been becoming increasingly frail in the last 3 or 4 months and of course at 94, his death was certainly not unexpected.

It was also what might be called “a good death” in that Nares didn’t suffer any dreadful pain or discomfort and he was surrounded by his closest family: myself, husband Gordon, brother Jonathan, my children Liam and Seran and – as it happened – her daughter Biba, who was asleep in her buggy.

He was also wonderfully well-cared for in his last days and hours by his excellent GP, his palliative care nurse and the fantastic staff at The Meadow where he has been living for the last 4 ½ years."

Nares Craig was born in 1917 in the week of the Russian Revolution, his father being the brother of the notorious Ulsterman Lord Craigavon.

Nares was educated at Charterhouse and Trinity College, Cambridge, whe

re he became one of the "elite" Cambridge night climbers and also became a life long committed socialist and later a communist, much to his families disapproval.

He left Cambridge and became a captain in the Armoured Engineers in the 1939-45 war. While commanding tanks adapted to carrying special assault equipment, he re-designed the Bailey Mobile Bridge to increase span capacity and reduce operating casualties.

After qualifying as an architect, he worked at the UK Building Research Station on investigations into housing design, production and erection processes, which were recorded in over fifty technical publications.

This work resulted in invitations to lecture in v

arious Third World centres, and later to the development of the low-cost Brecast system which was used widely in earthquake- and hurricane-prone areas. He was particularly proud to have been involved in housing issues in Chile, prior to the vicious US backed coup.

Nares lived and died a fully committed socialist, a socialism built not on dogma but upon harnessing his many skills on behalf of working people and ultimately empower them.

He was a quietly spoken man who brimmed with warmth for all he met, I'm proud to say I knew him, my sympathy to Nares family and friends.

"Man's dearest possession is life. It is given to him but once, and he must live it so as to feel no torturing regrets for wasted years, never know the burning shame of a mean and petty past; so live that, dying he might say: all my life, all my strength were given to the finest c

ause in all the world- the fight for the Liberation of Mankind." 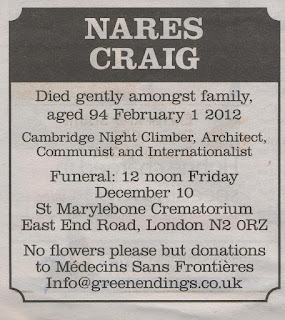