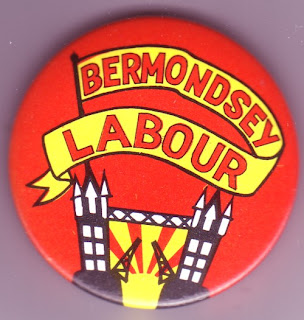 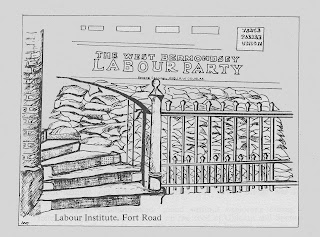 On the night of 18th September 1940 a German parachute land mine landed on the Bermondsey Institute ( 10:40pm) and totally destroyed the Institute and surrounding buildings.

The Labour Institute had been a ARP Wardens' post and when the building collapsed, the Post Warden was buried beneath the debris. when the rescue workers reached him, he was found to be alive and standing upright on a billiard table. The rescuers got his head and shoulders clear and all seemed well, when calamity came, The unsupported 40ft side wall of the adjoining destroyed chapel was suddenly seen to be swaying in the bomb blasts and over it crashed.

Two of the rescue workers John Bradley and Ernest Playford , made of themselves a living arch over the trapped Warden in an endeavour to shield him from the falling masonry. Despite their brave efforts the Warden was killed. Bradley and Playford received the George Medal for bravery At ten past eight on the evening of 18th September 1940, a distinctive co-operative venture ended when a bomb destroyed the Bermondsey Labour Co-operative Bakery, killing four bakery workers.

The bakery had been the brain-child of John Dhonau, a baker with his own business who joined the Independent Labour Party (ILP) in 1912. Following a practice common to the time, the ILP branch sold tea, tobacco and groceries to its members to raise funds. Dhonau proposed to Dr Alfred Salter, the ILP branch secretary and Bermondsey's Labour MP from 1922-1945, that his Keeton's Road bakery should be taken over and run as a co-operative.

ILP members saw the offer as an opportunity to extend their trading operations by manufacturing and selling bread, using the profits for more branch activities.

The scheme was publicised in circulars in 1913, a paid canvasser engaged and in nine weeks 600 new customers were gained. Facilities in John Dhonau's former premises were quickly outgrown. Fortunately, a few years earlier the ILP branch had agreed to purchase Fort Road Institute which, after over 30 years as a working-men's club and institution, had declined because of poor management. Behind the building was ground used for open air meetings, dances and garden parties.

Money was raised from ILP members, a mortgage obtained 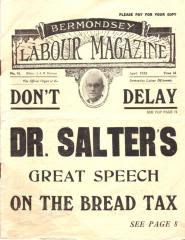 and the bold decision taken to build a new bakery on the ground, with John Dhonau as manager. The building was opened by Keir Hardie and Ramsay MacDonald on 4th July 1914 and the business went from strength to strength, although not without controversy.


In the Great War, for instance, it made donations to the anti-war movement and found jobs for conscientious objectors, including a concert pianist, a professional flautist and a stained glass artist. The cause was close to the heart of Dr Salter, a Quaker and a pacifist, but it appealed less to the Bermondsey Town Clerk, who told the Committee on Work of bakery is chiefly run by Socialists and opponents of the Nation's present military requirements, and . . . has become a refuge for Conscientious Objectors from all parts of the country."

After the war shops were reopened, further extensions made to the bakery, new plant installed, a confectionery department started, and mortgages and loans paid off. Bread delivery rounds were gradually extended to other parts of South East London, including newly developing estates in places such as Downham, to which many Bermondsey people were being moved by the London County Council. However, plans to start milk deliveries were dropped under pressure from the RACS. At its height it had 10,000 members

Help was given to scores of strikers .involved in post-war labour struggles, while after work the bakery's vans were used to help in Labour Party election activity. For the workers there were conditions well in advance of those generally common, and all could be closely involved in the way the business was run.

Of course, it was not all plain sailing. On three occasions the Master Bakers' Association sent deputations asking for the bakery prices to be increased. They also tried to influence millers to cut-off flour supplies: the millers resisted as the bakery bought large quantities of flour for cash. Then, in 1936, John Dhonau died and there were difficulties in filling his place. After the bombing on 8th September, 1940, the final blow was the destruction by a land mine of the Labour Institute ten days later.

But the Bermondsey Labour Co-operative Bakery had been a success. The conditions it gave its workers, the all round value it gave its members and customers, the assistance it gave to striking workers and other journeymen bakers in their campaign against night baking, and the contribution it 'was able to make to raising political awareness and activity through the "monthly Bermondsey Labour Magazine (distributed free to houses in parts of Bermondsey) gave the ( lie to local critics who had said' What do you Socialists know about business? You couldn't run an apple stall, much less a business undertaking".

The bakery had a banner which could be seen on demonstrations. One line of a verse on it read: "Yet, 'tis bread we fight for, but we fight for' roses too"

That line challenges us to match the confidence of those few who took the decision in difficult circumstances to show that socialist co-operation is a practical possibility. 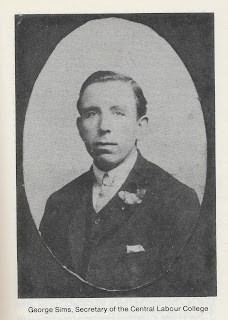 Southwark and Camberwell merged in 1969 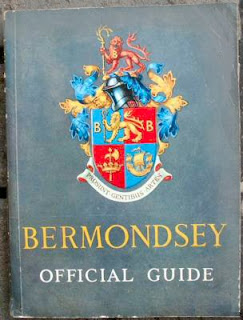 Reverend John Scott-Lidgett (1884-1953), Wesleyan minister and warden of Bermondsey Settlement, Farncombe Street, Bermondsey .
The Settlement was established in 1891 and clsoed in 1969